Not planning to make a purchase today?

Get the latest news, product releases & promotional offers by signing up for our mailing list.
FREE worldwide shipping with all regulator kits. Order before 4pm for same-day dispatch

What is, and why fit a regulator?

Thanks for a great product and your comprehensive playlist on YouTube. I am now getting a lot of shots at a VERY consistent velocity. A very happy Christmas to you and your staff. Regards from Denmark.
- Palle Kongsdal

I watched your videos on YouTube, the Air Arms guidance was very helpful. I now have more graphs than you can shake a stick at. Wanted to let you know how much I appreciate the product you manufacture and the service you offer.
- James Laud

I have your regulator in my Air Arms S410 .22 FAC classic now tweaked in. Twenty five dead accurate shots around the 915 fps range. SWEET. With your videos and feedback I was able to tear into a thousand dollar air rifle and actually improve it.
- Scott Freiberger

I'd just like to tell you that your regulators are amazing!!!! This regulator performs very well indeed. I'm now getting 50 shots with a standard deviation of 1.76 fps and a estimated spread of just 8 fps.
- Jaime

Installed your reg in my Falcon FN19 and it works perfectly. Easily the best money I've spent for quite some time. I recorded 100 shots with a variation of just 5 fps "all thanks to your regulator". You really are a genius, all the best.
- Darren Cady

I want to say what a great piece of kit your regulators are. I purchased one from you a few days ago and have fitted it into my Benjamin discovery .177, I am now getting 80 consistent shots at just under 12 foot-pounds.
- Steve Equipped with Lane regulators to provide speed stability and to increase the autonomy of the airgun considerably.

Regulated versions are available for all models of the Orion airgun series (produced by Cometa).

In reference to airguns, a regulator is used in the context of regulating air pressure within the outlet valve / firing valve chamber so as to stabilise muzzle energy and shot to shot consistency. The term airgun or air rifle regulator is therefore not a reference to a product that is used to raise / increase or boost an airgun / air rifle's muzzle energy, the regulator will only keep an airgun's muzzle energy (ft lbs / joules) to the power at which the firearm has already been tuned to at a set working pressure.

A mythical legend rumoured amongst nearly all airgun shooters, is that a perfect regulator will make every single shot you fire 100% identical and that fitting a good one will double your shot count!!!! This is indeed an absolute myth as all a regulator is "is simply a robust pressure switch" and all a regulator does "no matter what make or model you buy" is designate a pre-defined set working pressure to your airgun's internal workings as a whole (the intention being to fine tune your airgun to a specific choice of pellet). With this in mind, installing a regulator can really work wonders as long as the installer takes the time to balance the full outlet valve and firing mechanism correctly.

An airgun regulator is essentially, a very simple mechanical valve or switch (normally just the one but can have up to four moving parts) that operates when pressure in the regulated outlet valve chamber falls below a set pressure as the air gun is fired. Regulators / governors working upon surface area differential were first invented and put to use on steam engines in the industrial revolution (1700's). Their design and use has changed little over the years.

An airgun regulator will In general be one of two designs, either an opening and closing valve (valve opens itself with a drop in pressure then shuts with a rise in pressure) or a closing and opening valve (piston pushes open a valve when pressure drops and then closes it when pressure rises). The regulator is designed and set up so as to keep the air pressure in the outlet valve chamber at a constant pre set pressure, as the variable pressure within the main air reservoir chamber falls (as shots are fired).

You are using a regulator valve in your every day to day life that works on exactly the same principle as an airgun regulator but you just didn't know it! Most houses fitted with a gas supply or bottled gas use regulators. These are built into all the appliances such as cookers, water heaters etc. so as to give a constant safe working pressure. Interestingly most flush toilets have a valve (regulator) that works on exactly the same principles as all airgun regulators!

A PCP airgun in essence is quite a primitive mechanism, it has a high pressure air reservoir which is where the compressed air in the reservoir holds the energy. When you pull the trigger, a hammer (weight) is propelled forwards by a spring that simply hits the outlet valve pin, which opens a little and a small blast of the compressed air (Energy) escapes and propels your pellet down the barrel. 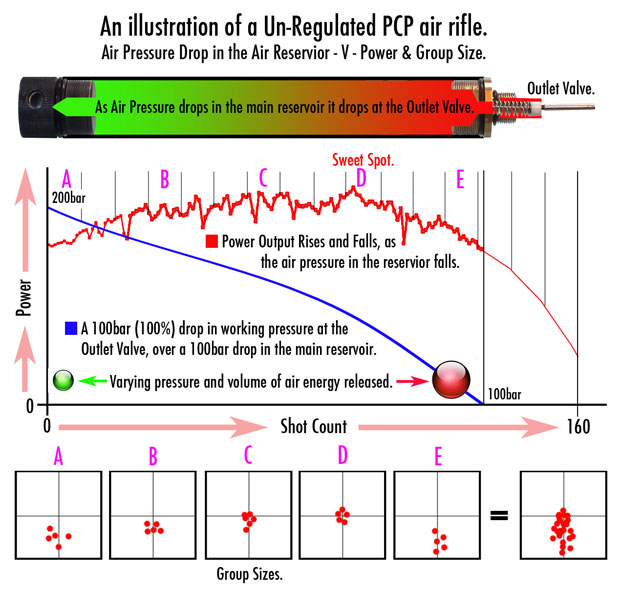 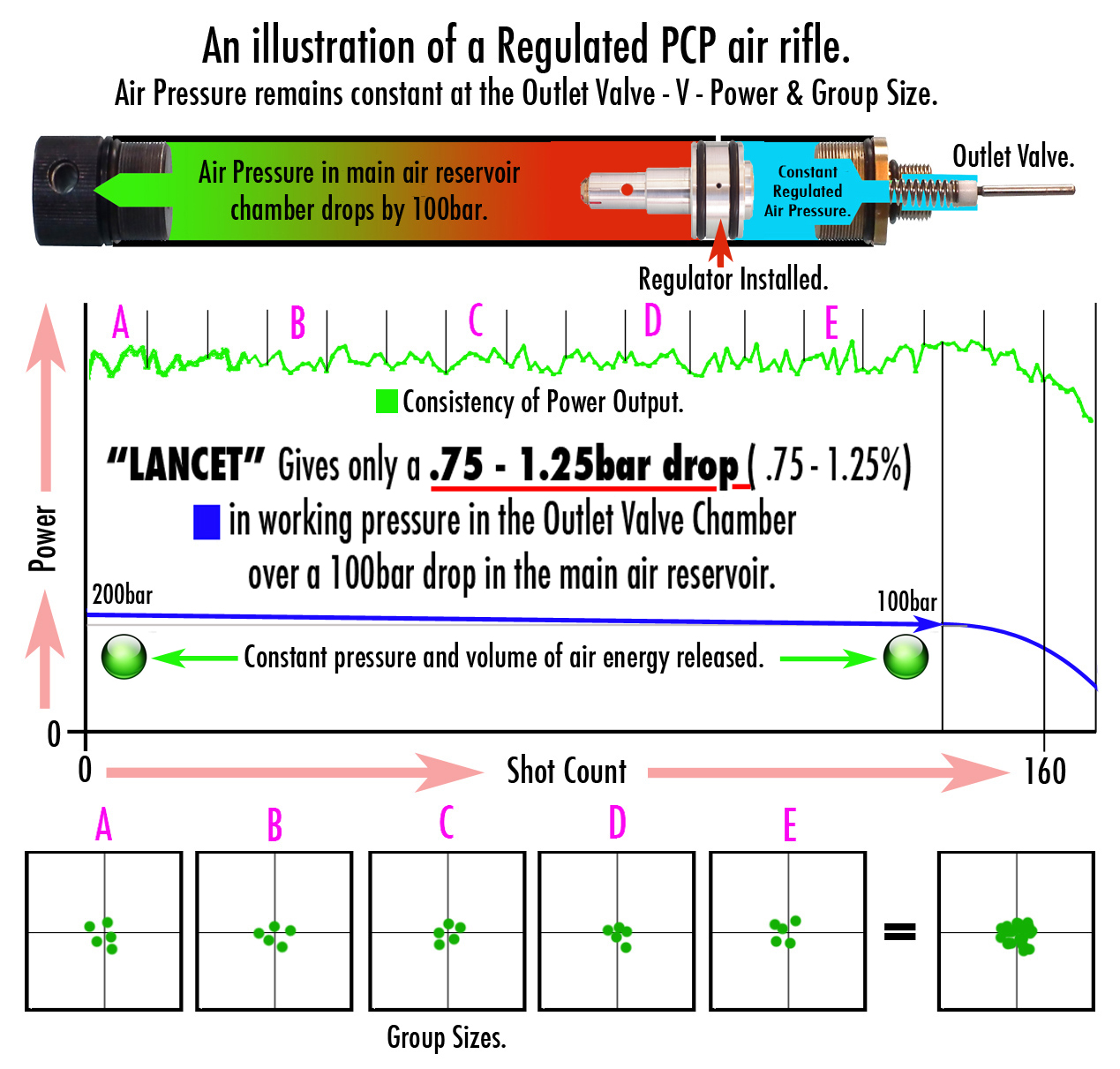 However you will notice that this system is not perfect and power will alter over the 100bar drop in pressure in the air reservoir. This may be a slow constant fall in power, a slow rise then rapid drop of or most commonly a slow rise and fall - Curve / Arc.

So during every shot the Regulator valve opens and shuts and so keeps the pressure in the Outlet Valve Chamber (Pre Chamber, Plenum Chamber) constant for every shot, until the pressure in Main Air Reservoir Chamber is equal to or lower than the set pressure of the regulator.

By keeping the air in the Outlet Valve Chamber at a set constant pressure you stabilize your shot to shot (Feet Per Second / Meters Per Second) consistency at the muzzle. Which leads to greatly improved accuracy. It also means that the Outlet Valve Assembly can be tuned to use the energy stored within the compressed air far more efficiently.

Once a regulator is installed and the Outlet Valve Assembly re-balanced then you can in general use your rifle over a larger pressure range, this combined with the more efficient use of energy stored in the reservoir means that shot count remains the same for most high power air guns and some 12 ft/lb. rifles (Not ultra carbines) can experience a good percentage rise in shot count / Total muzzle energy expelled.

Greater efficiency of energy used means that there can also be a reduction in muzzle blast ‘Kick’ - ‘Flip’ and a reduction of muzzle noise ‘Blast’.

This is no mean feet, especially for 10-15 ft/lb air rifles and if you are not mechanically minded or a patience, precise worker, setting about fitting a regulator may not be the project for you.

For even more information on regulators

Robert Lane discussing the topic that is regulators. How they work, what they are and why you should fit one in your airgun.